skip to main | skip to sidebar

What are you wearing for Halloween??

Day of the Dead Skulls hand crafted by Illustrated Ink, 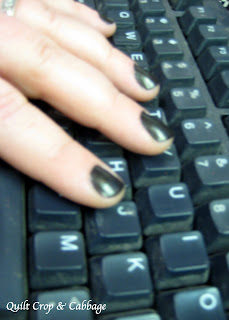 Black finger nails are very distracting when I'm trying to type....I feel as thought I need to type delicately and with care. Oh, I know it's not much of a costume but it IS slightly festive, no? 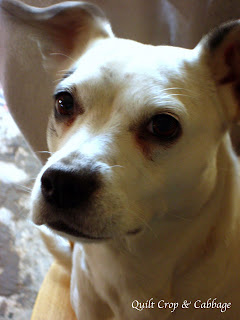 Most Interesting Feature: Cheyenne has one ear that folds over perfectly while the other always points to the left. We tried and tried to train it to fold over TO NO AVAIL. She'll always have a special ear, just like Nemo and his special fin.

Likes: Daddy, playing with tennis balls, rope toys, and SOCKS, chore time, high pursuit of cats, snuggling in the blankets, and surfing with her head out the car window.

Dislikes: Strange men entering her house wearing work boots, being left in the house when her parents are outside and cats who refuse to run.

Funny Story: When we first moved to the farm, Cheyenne took off in the night to chase one of the cats. Shortly after she disapperaed we heard a giant THUD and she came racing back to us crying at the top of her puppy lungs. We thought perhaps the cat had scratched her. I picked her up to comfort her and caught a big wiff of creosote... turns out Cheyenne had run head on into a telephone pole! To this day she's very cautious when running full speed in the dark!

Dogs are not our whole life, but they make our lives whole. 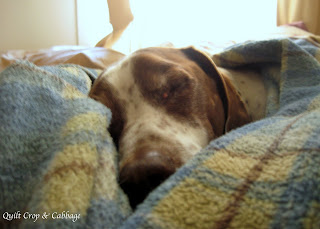 I talk to him when I'm lonesome like; and I'm sure he understands. When he looks at me so attentively, and gently licks my hands; then he rubs his nose on my tailored clothes, but I never say naught thereat. For the good Lord knows I can buy more clothes, but never a friend like that. ~W. Dayton Wedgefarth

A man may smile and bid you hail
Yet wish you to the devil;
But when a good dog wags his tail,
You know he's on the level.
Author Unknown

A dog is the only thing on earth that loves you more than you love yourself. ~Josh Billings

You think dogs will not be in heaven? I tell you, they will be there long before any of us. ~Robert Louis Stevenson

Dogs are not our whole life, but they make our lives whole. ~Roger Caras 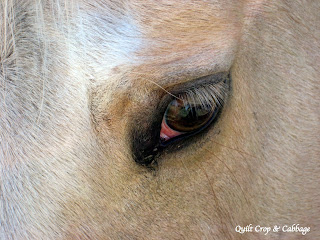 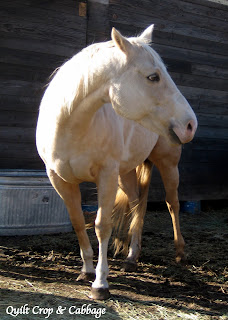 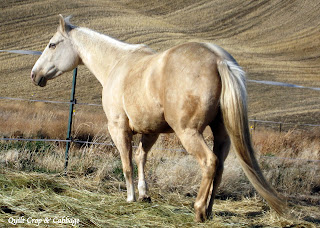 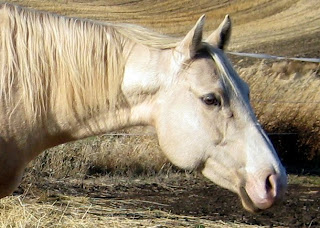 Meet our new mare- Likea Diamond Peppy "Cinders". Jason spent many long rainy hours traversing the state Friday/Saturday to retrieve her from the west side. MEGA Thanks to Suz and Dave for loving her for a few weeks! She's a wonderfully sweet girl and I'm so very excited to build a horse/horsewoman relationship with her!

It's a vicious circle 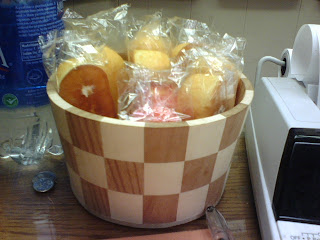 That, my friends, is a treat bucket FULL of Twinkies and Zingers. Thank you Hostess for creating them, thank you boss for bringing them...SOMEONE COME EAT THESE GUYS QUICK! I just know the customers are thinking "OMG, why does this office girl have a giant bowl of TWINKIES on her desk? And putting a liter of water next to this display of sugary indulgence doesn't make it look any better!" 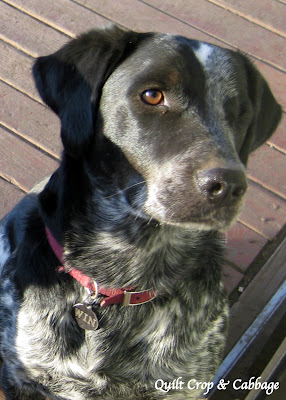 Most interesting feature: Win has only one eye. He was born with two but the left eye had some kind of trauma or damage and was swelling and causing Win tremendous pain. We took him to his favorite Veterinarian for a check up and to get "tutored" and they highly recommended removing his eye. They assured Win that he would no longer be in pain and that his vision wouldn't change as he was only seeing out of the right one.

Likes: Running and rough housing with his brother Remi, rolling in freshly used towels from Mom and Dad's showers, snoozing on his back with all four feet in the air, rope toys, plastic buckets to bark in, cookies and anything Mom might be eating.

Dislikes: Showing anyone his bubba teeth.

Recent Funny Story: Last night Mom was laying on the bed with her hair hanging over the end and Win was walking back and forth through it, snuffling and playing. He threw himself on the ground under Mom's hair and put his paws up to bat at it like a cat. SUDDENLY he grabbed a giant mouth full and TUGGED! Mom let out a OUCH! and he let go. What a trickster!

Giant Leap of Faith: Win, having vision in only one eye, was deathly afraid of the staircase at home. He would stand with his front feet on the bottom stair and **bark bark bark** for his brothers, sister, and Momma to come down. Mom tried and tried to get him to climb the staircase to no avail. One day, not long after his pirate surgery, Win was feeling especially brave (Mom may have taken some particularly delectable treats half way up the stairs). He slowly climbed each stair as if it could give way at any moment, step by step, to the very top! From that moment on he's been able to run up and down the stairs with no concerns! Fear CONQUERED!

Only because I found this set of pics again and had a good chuckle.

THE Adventures of Farmer Xander and Curly Joe Chicken

There once was a farmer boy named Xander who was known to be the best chicken holder in the entire Inland Northwest. 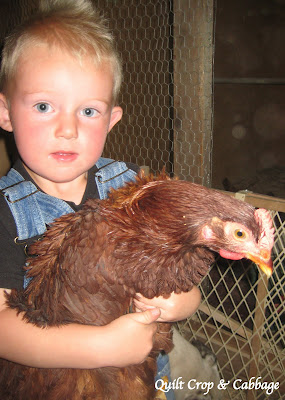 You see, he just LOVED chickens, especially Curly Joe. Curly Joe was special- for he was curly feathered unlike the other chickens who were simply strait feathered. He was a big curly rooster of a chicken. Because of Joe's quirky curly feathers, farmerette Aunt Wraylee handled Curly Joe often over the short course of his life. She thought herself pretty special to have a curly chicken and even more special to have one Grade A chicken holding nephew. She could not, nor would she, deny the farmer boy his chicken holding time...... 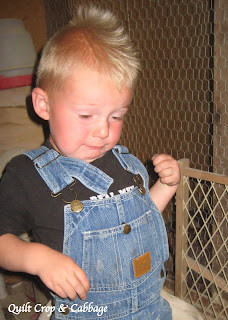 ...regardless of how frequently he let go of Curly Joe!

Hi. My name is Wraylee. I'm an unfaithful blogger.
There! I said it!
As you, my ever so faithful blog readers, may have noticed (and delicately pointed out, ahem), there has been a SEVERE shortage of new posts from me. How could this be? Hmmm, could it be due to the change in day light hours? No super cute pics get taken when I can hardly see. Could it be due, in part, to the ever increasing amount of tasks on my daily to do list? Hahahaha, to do list! As if I have time to write it down!
To be honest, I haven't posted lately because I've been busy, swamped, OVER whelmed in fact!
Don't be concerned for long, dearest readers. I plan a full scale decorating and painting assault on our casa while the dear hubby is out in the woods for two weeks. Fortunately,and thanks to modern technology, I can turn the lights on and take pics to share with you!
STAY TUNED!
Posted by Wraylee 0 comments 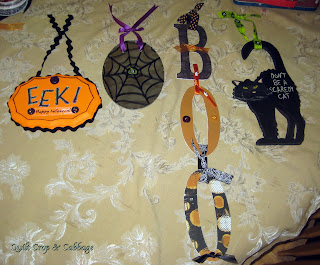 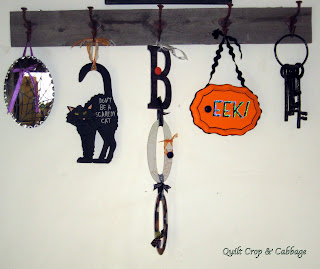 ________________________
We used the Cricut to cut out EEK! (black paper for the main letter, glitter paper for the shadow). Halloween paper and ribbon mounted on chipboard letters (found at Paper Pals) made a super cute BOO. We used a paint marker to drawn spider webs on the mirrors. The Scaredy Cats came from Shopko and my skeleton keys came from Real Deals in Spokane- they just happen to go with the Halloween theme perfectly!
Twas a fantastic day!
Posted by Wraylee 1 comments 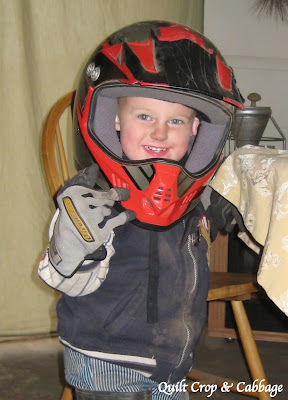 BRING IT ON! This boy is ready to go! He's got his helmut, gloves, and tall rubber boots (which you catch just a glimpse of at the bottom of the photo). I'm suprised he can even move! Yet, he's the picture of fun in this get-up! ALL BOY! 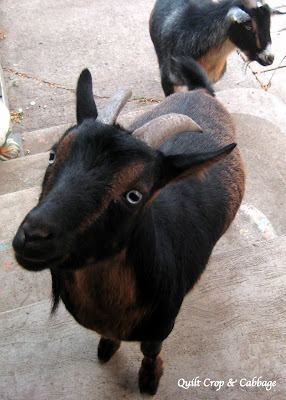 Pesky door to door salesmen!
Luna and Merlin seem to enjoy coming up on the back porch and looking through the screen door at us. Her stare is reminiscent of a Girl Scout trying to meet a cookie quota! "Please lady, just buy one box of Samoas, OK????? PLEASE?????"
Posted by Wraylee 0 comments

How bout them cowgirls! 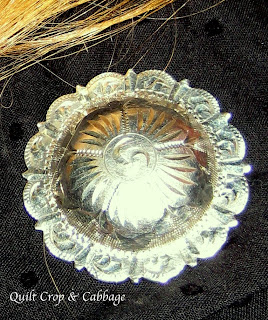 The cowgirl faces life head on, lives by her own lights, and makes no excuses.
~ Dale Evans~
Posted by Wraylee 0 comments

What's with that egg? 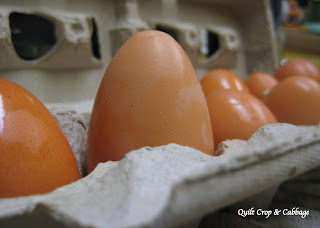 NARFLE THE GARTHOK!
It's a conehead egg! Our chickens generally lay the same size eggs but on occasion I find interesting shapes and sizes. This is the first cone shape! Wouldnt you know, this one is a double yolker! Is that lucky???
**On a side note that ONLY Mr. Cook and Bishi will understand....I checked my sources for the spelling of Narfle and GarTHOK!**
Posted by Wraylee 0 comments

I've change settings so you don't need a blogger account to leave comments on blog posts. Please sign them or they will be deleted!
Did you know that you can click on posted pictures to see more detail? Please don't "borrow" them without asking first!

Wraylee
I'm a small town farm girl, loving the rural life. I'm crafty and creative and enjoy using those talents to make gifts for friends and family. I'd love to open my own scrapbook/crafty business someday!

"It is always sad when someone leaves home, unless they are simply going around the corner and will return in a few minutes with ice-cream sandwiches."— Lemony Snicket